This tiny terror of nature has been keeping the wildlife around our house in balance as mother nature commands it for the past year. Having seen such greatness embodied so elegantly within this cunning yet cute miniature fur lion, my fiancee and I decided to start feeding the silent killer. Some would say we were giving offerings to gain favor of the tiny fur God and they would not be wrong. Such an ally would pose a great threat to the quick annoying beasts that try to get in the attic of our house.

For one year we fed and wooed the deadly predator, as strong alliances needed to be forged. He was skittish at first but the rewards of tasty lunch meat where too powerful to withstand. I could see the doubt, mistrust in his eyes. Why should he trust the hairless ones? No one in Lakeside has ever shown him kindness. However, we might be different, maybe just stupid. We gave meat gifts.

A hardened stray he was. Fighting everyday for crumbs. Honorable enough to not get into the garbage. Watching us return from adventures, since that is when we share the meat bounty. I knew he believed he was hidden when he watched us from behind the safety of a bush with his very matted bushy tail waving like a flag. We were both on respectable missions; one for food the other to gain a deadly new ward for the home.

Before long, the matted fluff of fur is willing to get close as we feed him.

Then one day, I petted his predatory ass and found out the beast is not a beast at all. Scared of the goodness of head, chin, and butt scratches but addicted nonetheless from this point on. The addiction is worse than catnip. He’s gotta have the tasty lunch meats and caresses from the loving hairless meat monkeys.

Plucked from the mean streets and no longer a misunderstood killing machine the name
Loki “The Squirrel Killer” Bob Warnock was given.
Accepted into a new realm as a fur prince deserving the softer finer things in life.
Well, until he needed to be de-matted…
BLOODY BEAST MODE! 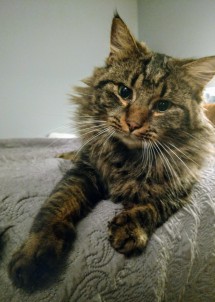 Loki the newest boss to the family…